I wrote last week about the problems currently being experienced at the US Post Office.  It’s clear the organization is in deep trouble, and its new chief executive is doing his best to reorganize it on business lines (as required by laws passed by the Congress and Senate, let it be noted).  This is anything but to the taste of left-wing and progressive politicians, who are jumping up and down and screaming that the whole thing is an attempt by President Trump to sabotage the November elections.

They’re lying through their teeth.  It’s nothing of the sort.  Any objective examination of the evidence demonstrates that beyond any reasonable doubt.

I say that not because I’m pro-Republican (I’m not) or pro-Trump (ditto), but because I value the truth, and I value verifiable facts when it comes to making up my mind.  Both are available in abundance on this issue.

To begin with, the Post Office’s troubles are due to many factors.  Commercial carriers have been eating its lunch for many years when it comes to high-value packages and shipments.  You can read the statistics for yourself.  Overwhelmingly, the USPS handles low-value, high-volume packages, while those generating higher revenue are sent via commercial services.  What’s more, volume of mail has been steadily dropping, as the Wall Street Journal demonstrates in this chart (click the image for a larger view).

This reduction in demand for its services has eaten into the Post Office’s revenues and profits.

Added to that are legal funding and revenue requirements that have hobbled the USPS.  Those requirements are far more arduous than any imposed on its commercial rivals.

[The Postal Accountability and Enhancement Act of 2006] was the first major overhaul of the United States Postal Service (USPS) since 1970. It reorganized the Postal Rate Commission, compelled the USPS to pay in advance for the health and retirement benefits of all of its employees for at least 50 years, and stipulated that the price of postage could not increase faster than the rate of inflation. It also mandated the USPS to deliver six days of the week.

Between 2007 and 2016, the USPS lost $62.4 billion; the inspector general of the USPS estimated that $54.8 billion of that was due to prefunding retiree benefits. By the end of 2019, the USPS had $160.9 billion in debt, due to growth of the Internet, the Great Recession, and prepaying for employee benefits as stipulated in PAEA. Mail volume decreased from 97 billion to 68 billion items from 2006 to 2012. The employee benefits cost the USPS about $5.5 billion per year; USPS began defaulting on this payment in 2012. The COVID-19 pandemic further reduced income due to decreased demand in 2020.

Note that those requirements are not optional for the USPS:  they’re imposed by law.  The reforms recently initiated by the current leadership of the USPS are explicitly designed to meet them.  Failure to do so is literally breaking the law.  There’s no ‘wiggle room’.  Earlier this year Congress passed a bill removing and/or easing some of those requirements, but the matter was not taken up in the Senate and has not been signed into law, so the status quo imposed in 2006 remains in effect.

Despite current reforms, the USPS remains fully capable of handling mail-in ballots in the November elections.

USPS has repeatedly made clear it can easily absorb any uptick in mailed ballots and has long been preparing for such an event.

The Postal Service, prior to the swearing in of current Postmaster General Louis DeJoy, asked Congress for $75 billion in financial assistance to offset losses from the novel coronavirus pandemic and fund “shovel ready” modernization projects. No part of the request, however, was tied directly to delivering ballots to voters or back to election boards. Postal management said in a financial statement last week it has sufficient funds to operate normally through at least August 2021. Paul Steidler, a senior fellow with the Lexington Institute, noted that even if 60% of the electorate votes by mail it would only lead to about a 1% increase in the Postal Service’s normal delivery volume. The Postal Service itself estimated mailed-in ballots would account for 2% of the agency’s volume between September and the Nov. 3 election.

“Given our available processing capacity, we can easily handle the anticipated increase in election mail due to the COVID-19 pandemic, without impact to on-time performance,” wrote USPS executive vice presidents David Williams, also the agency’s chief logistics and processing operations officer, and Thomas Marshall, also the USPS general counsel, in a USA Today op-ed on Wednesday.

Even the USPS employees unions, strongly left-wing organizations that have endorsed the Biden/Harris ticket for the election, agree on that point.

The National Association of Letter Carriers (NALC) and the American Postal Workers Union (APWU) know the truth; the members of these unions are the people who actually process and deliver the mail. Postal Workers and Letter Carriers both say, unequivocally, that … the system remains fully capable of delivering every single ballot cast by mail in a secure and timely manner.

Indeed, the NALC assures that even if every single vote in the November 2020 election were cast by mail, the U.S. Postal Service would have no problem delivering the ballots, whether or not Congress provides the funding included in the HEROES Act.

The U.S. Postal Service has an entire structure in place to coordinate with state and local election boards to facilitate secure and timely delivery of mail ballots.

More at the link.  You can read the NALC Fact Sheet on the 2020 elections here.  Straight from the horse’s mouth, so to speak, it proclaims:  “America Can Count on the U.S. Postal Service”.

The new USPS Postmaster-General is being blamed for removing mail sorting machines from service, allegedly in an attempt to interfere with processing mail-in ballots.  The truth is that he did not take that decision.  It was made before he was appointed.  In an excellent, thorough and wide-ranging review of the USPS and the elections, Nick Harper points out:

So, yes, USPS is deactivating mail-sorting machines that sort some types of mail, including mail ballots. Some of these are being relocated, but there does appear to be an outright reduction going on with the remainder being dismantled. But … the intention does not appear to be to slow the sorting of mail … the plan to reorganize and rightsize the sorting machines is dated May 15, a month before DeJoy took office and less than a week after the Board of Governors announced his selection. Not only that, but the document shows that earlier deadlines were missed and gives extended deadlines, which implies that this plan had already been around for quite some time.

And other facts back the reasoning of the plan. The type of mail these machines sort are decreasing in volume, including down more than 15% just this year compared to last year.

In other words, DBCSs have less mail to sort than they ever have before and it’s far from clear how much of that mail is ever coming back. So it stands to reason the USPS might not need as many of them.

The necessity and prior existence of this plan is further enforced by the Inspector General’s September 2019 report on processing network optimization. The report describes how USPS has been trying, and failing, to consolidate processing and rightsize infrastructure in order to reduce costs. In fact, the issue has been researched since as early as 2012 by the Government Accountability Office, and the volume of mail has only declined further since then.

This action also aligns with the five-year strategic plan that was published before DeJoy was even selected: “Continuously optimize location of network processing operations and equipment as mail volumes decline and parcel volumes increase.”

Despite all these facts, the Democratic Party and left-wing and progressive sources are jumping up and down and screaming that the whole thing is an attempt by President Trump to interfere in the elections.  For example, here’s (Democratic) Senator Brian Schatz on Twitter, three days ago:

He’s been beating on that drum for days now, and shows no sign of stopping.  The Drudge Report, formerly a conservative news outlet but long since transformed into a shill for left-wing politics, tells the same alarmist, panic-mongering tale, ignoring the other side of the story.  Here’s a selection of headlines from yesterday’s edition. 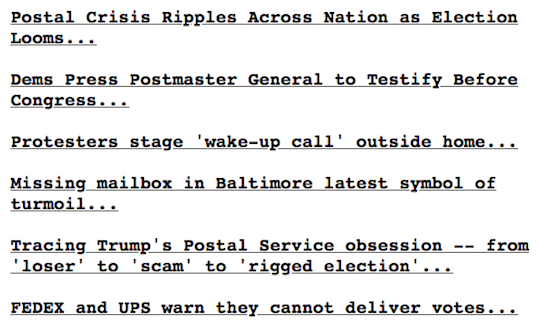 Nancy Pelosi, Speaker of the House of Representatives, is even worse.

House Speaker Nancy Pelosi suggested members could be brought back from August recess to address issues regarding the U.S. Postal Service, while urging Democrats to appear at their local post offices amid the battle to protect mail-in ballots for the 2020 presidential election.

Pelosi, D-Calif., on Sunday said the post office has become “Election Central” thanks to the coronavirus pandemic even as President Trump and Republicans have warned for months that universal mail-in ballots would cause widespread voter fraud in the election.

“Alarmingly, across the nation, we see the devastating effects of the President’s campaign to sabotage the election by manipulating the Postal Service to disenfranchise voters,” Pelosi said.

Pelosi went on to slam Postmaster General Louis DeJoy, calling him a “top Trump mega-donor” who has “proven a complicit crony as he continues to push forward sweeping new operational changes that degrade postal service, delay the mail, and – according to the Postal Service itself – threaten to deny the ability of eligible Americans to cast their votes through the mail in the upcoming elections in a timely fashion.”

“These delays also threaten the health and economic security of the American people by delaying delivery of life-saving medicines and payments,” Pelosi said. “Lives, livelihoods and the life of our American Democracy are under threat from the President.”

The facts of the situation simply don’t square with what left-wing politicians and pressure groups are saying – but then, facts never bothered politicians on either side of the aisle.  They should bother voters, very much:  after all, we’re voting to elect people who have to manage reality, not propaganda.  However, many voters simply won’t bother to exercise due diligence and ascertain the facts for themselves.  That’s why such propaganda all too often succeeds, to the detriment of our democracy.

That’s why I took the trouble to read through the sources, and find out the facts of the matter.  I hope you’ll pass on those facts, and the references I’ve provided, to anyone trying to stampede you with partisan political propaganda . . . if they’ll listen, that is.  For far too many of them, it’s a case of “My mind’s made up – don’t confuse me with the facts!”

That bodes very ill for our democracy, come November.  It’ll be even worse if the election is close, and partisan extremists on either side start jumping up and down and screaming that the election is being stolen.  I’ve no doubt some of them will allege that the USPS is complicit in what they’ll declare is vote fraud and/or mismanagement.  It almost certainly won’t be, of course – but that’ll damage the USPS as an institution in the eyes of those it serves, which will be a huge hurdle for the Postal Service to overcome under any new Administration.  It’ll also fuel the flames of discontent, dissent and division that currently divide us . . . precisely what we don’t need.