If your blood doesn’t run cold on reading this news, you don’t understand the situation.

The White House on Wednesday unveiled its plans to vaccinate children between the ages of 5 and 11 years old, pending authorization by the Food and Drug Administration (FDA) in the coming weeks.

The Biden administration said it has purchased enough vaccines to give shots to all of the country’s 28 million children ages 5 to 11 years old, and have been working with state and local leaders to be ready to distribute the vaccines once they are authorized.

The distribution plan will rely on more than 25,000 pediatricians’ office, community health centers, schools and pharmacies to put parents and children at ease, rather than the mass vaccination sites used in the initial rollout for adults.

Now put that together with the attitude displayed by a gubernatorial candidate in Virginia yesterday.

Former Virginia Gov. Terry McAuliffe handed his Republican gubernatorial opponent Glenn Youngkin a campaign ad on a silver platter during a Tuesday debate by stating that he would not allow parents to tell schools what to teach their children.

McAuliffe, a Democrat who is seeking a second, nonconsecutive term as Virginia governor in November’s off-year election, proudly acknowledged Tuesday that he vetoed legislation while governor that would have alerted parents when there was sexually explicit content in instructional materials.

“I’m not going to let parents come into schools and actually take books out and make their own decision,” McAuliffe said. “I don’t think parents should be telling schools what they should teach.”

So much for parental rights, eh?  Add to that the dictatorial, “I-don’t-answer-to-you” attitude just displayed by a Colorado school, where young children’s COVID face masks were TAPED TO THEIR FACES by domineering, bullying teachers.  Parental consent?  Not requested, and not even considered, AFAIK.  It’s a story that should make your blood boil with indignation, if not an altogether stronger emotion – but it’s happening right now.  Do you know what the policies and practices of your local schools and School Board are?  If not, why not?

I’m willing to bet a large sum of money that as soon as FDA approval is given to vaccinate children against COVID-19, some schools in some parts of the country will begin inoculating children with or without their parents’ consent.  They’ll arrogate to themselves the right to decide what’s best for the child.  They’re already doing that in some states by providing free contraceptives, even abortifacients, to teenage children without telling their parents.  There’s no reason in the world why they won’t decide that a vaccination “for the chiiiiiilllldren!!!” doesn’t fall under the same purview.  After all, they know they’re right, and those who object are wrong.  They’re ideologically pure in their own eyes.  We’re not.

If you have children in public schools, particularly in “blue” states where the government feels it can dictate to its subjects what they may or may not do, you’d better start thinking twice, and then some, about getting them out.  The damage being done by COVID-19 vaccines is astonishing:  figures so high that any previous vaccine would long since have been withdrawn.  See for yourself (click the image for a larger view): 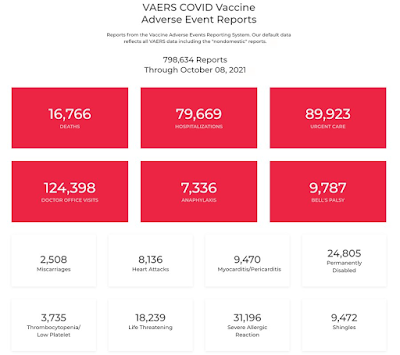 If you want that in your child’s veins, just do nothing.  If, like me, you regard it as potentially more harmful than helpful . . . get your child out of public schools.  Now.

If you can’t do that, make sure you notify the school, in writing (preferably a formal letter from a lawyer) that you forbid them to administer any vaccination to your child for any reason whatsoever, and threatening severe legal consequences if they disregard this warning.

I daresay some people will go so far as to threaten extra-legal consequences if schools do that.  I totally understand their anger and concern.

As far as our children are concerned, Big Brother is trending more and more towards Moloch.