I’ve written extensively about the economic impact of the COVID-19 pandemic, and I’m not going to repeat it all here.  Many others have shared similar observations.

I found a recent article at Dark Brightness, a New Zealand blog, to be a very good checklist for my own preparations.  The blog has a lot of faith-based content, but being a retired pastor, that’s something I don’t mind at all, so I’ve become a regular visitor there.  I had to laugh at the author’s meme about New Zealand prime minister Jacinda Ardern: 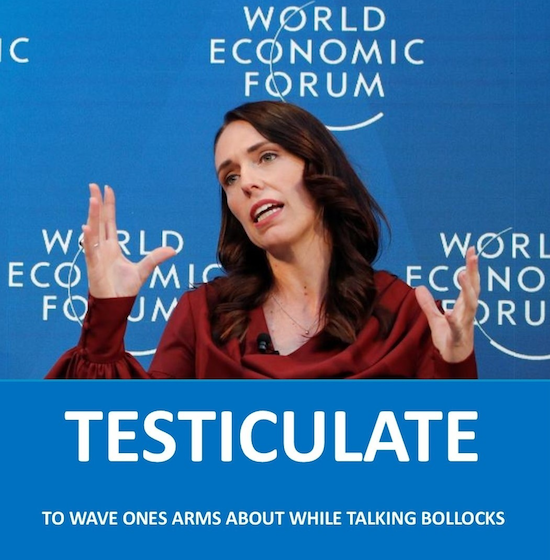 The article from which it came contains a lot of very useful thoughts.  Here’s an excerpt.

Sell your assets now, before the file sale. Prices are flat to going up: use that. You need to free up capital. Sell your house first and rent out of town.

Look around the house: Do you have collectables? Downsize your car. Get the mortgage gone and the credit card paid up and torn up.

If we head into a depression, cash is king … There is a chance that the government will either hyperinflate or confiscate savings, but the biggest risk right now is a global depression, and in such a time you want to have cash for the fire sale that will happen after the storm and when the banks are forced for foreclose.

If you do sell, don’t spend your capital. You are going to need it.

Live not as your parents lived. They grow up with inflation: if you did not buy something now it would be more expensive in a year’s time. That includes my parents, and they predate boomerdom. Instead think of their parents who lived during the depression. They did not have much, but what they had was very good quality and they cared for it.

The aim here is to spend as little as possible over the long term, use as little outside the house as possible, and survive on one full time income – which may be two or three part time jobs.

Buy carefully and buy quality. Have good clothes (it is time to resurrect “Sunday best”) and work clothes and then rugged clothes: for many work clothing will be rugged clothing.

Get good tools, learn how to use them, sharpen them, and repair them.

About a year ago … we went through a lot of our clothes, got rid of the worn out ones and the things we did not wear, and bought a few needed replacements. We had found, when traveling, we only wore half of what we bought. Do likewise: repair, reuse, wear out. Shopping is now hunting for quality – and you won’t find that in the main city streets, but you may find it in the farm equipment shops.

There’s more at the link.  Interesting and thought-provoking reading.

At a recent gun show in a city near us, I saw signs confirming much of what I’ve forecast, and what the article above warns about.  There were a lot fewer people than usual walking the aisles.  That may have been due to fears of being exposed to COVID-19, or perhaps because after several months of economic hardship, people didn’t have much money to spend.  I suspect the latter.  Nevertheless, business was abysmally slow, and many vendors were despondent.  If one had cash to spend, some real bargains were available as sellers tried to get whatever they could, and cut their prices.  Cash was, indeed, king that day.

I also noted several vendors who were private citizens looking to make ends meet.  They were unemployed, and had no way to earn a living except to sell their personal firearms and ammunition stocks.  Some had sold most of their collections.  That’s sad for them, but at least they had something to sell, and could raise money that way.  Others are not so fortunate, right now.

The Wall Street Journal posits that COVID-19 promises to bring long-term disruption to the world.

The pandemic’s legacy will be crisis and chaos—and the trajectory of human civilization has shifted in ways that will test political leaders and economic policy makers more severely than anything since World War II. This is partly because the return of great-power competition introduces new risks and complications into the international system. More fundamentally, it is because the information revolution is beginning to disrupt the world as profoundly and traumatically as the Industrial Revolution disrupted the 19th-century world.

The transformation of the workplace by information technology has been a bright spot in the pandemic, allowing many businesses and important institutions to continue functioning even as key employees stay home. But the same transformation is also driving many of the forces destabilizing society: declines in stable manufacturing jobs, whole regions hollowed out by economic change, the collapse of professional journalism and the rise of social media, the implosion of traditional retail, and looming job threats as self-driving cars and other new technological innovations move into the marketplace.

A host of 21st-century problems threaten to overwhelm the institutions of both national and global governance: the emergence of China as a new kind of economic and geopolitical challenger, the escalating arms races in cyber and biological weapons, the global surge of populism and nationalism, and the growing risks from poorly understood vulnerabilities and relationships in volatile and rapidly changing financial markets. Any one of these could push the world into a cycle of crisis and conflict resembling the first half of the 20th century.

Covid-19 is less a transient, random disturbance after which the world will return to stability than it is a dress rehearsal for challenges to come. History is accelerating, and the leaders, values, institutions and ideas that guide society are going to be tested severely by the struggles ahead.

In case the WSJ article isn’t clear enough, its reference to “the first half of the 20th century” encompasses the Great Depression, sandwiched between the First and Second World Wars, the bloodiest conflicts in human history.

I don’t see any rapid recovery on the horizon, economic or otherwise.  I continue to predict hard times ahead.  Please think about your own situation, consider what I’ve written (and what the blogger at Dark Brightness has to say), and prepare as best you can.