I’ve long been a supporter of the Salvation Army when it comes to effective, realistic, practical disaster relief and help to the poor.  For decades I’ve donated to them in preference to the Red Cross or other mammoth, overly bureaucratic relief organizations, and I’ve recommended them to my readers in these pages.

Sadly, the truth proved to be even worse than I’d feared.  Despite their protestations about being “misunderstood” and their immediate withdrawal of the “guide”, it was clear that at least part of the Salvation Army’s leadership had been seduced by the theoretical as opposed to the theological.  They had lost sight of the eternal truth that a Christian church’s primary, overriding duty and responsibility is to proclaim “Jesus Christ, and Him crucified“, rather than any other message (particularly secular ones).  In proclaiming the former, the latter are automatically addressed, albeit from a radically different perspective to the world’s answers.

If you wanted to completely destroy the guiding mission of a charity, the Salvation Army is showing everyone exactly how to do it.

I’m not sure what qualifications or prisms others use, but myself, as a donor, I want to see my money used by a charity in such a way as to care for people who are in the most need – and that has absolutely nothing to do with race or any other qualification.  I am literally stunned by the intent of the Salvation Army in this mess, and their cleanup effort is even worse.

This is one of the biggest disappointments of the year, and yet, again shows that organizations can lose their entire purpose by following leadership making stupid decisions.

(Tragically, the Salvation Army finds itself in good company.  Many mainstream Christian denominations have done as badly, or worse.  To name just one example, look at how the hierarchy and leadership of the Catholic Church have effectively abandoned the faithful over the past twenty years or so in connection with the clergy child sex abuse scandal and other issues.)

Now the Salvation Army finds itself desperately short of funds and other contributions.

The Salvation Army is facing a shortage of toys and donations ahead of the holiday season, and urge communities to find a way to help.

The nonprofit reports it gets 75% of total annual donations during November and December, and they are once again in need of support … “There are many reasons why both financial and toy donations are down this year, not the least of which is likely pandemic fatigue and concerns about employment and the future,” said Colonel Cindy Foley of the NW Salvation Army Division. “We are actually trying to provide food, shelter, toys and clothing to double the number of families we served last Christmas, and in the midst of the growing need we are seeing fewer people donating at our virtual and physical kettles.”

Surprise, surprise!  What else did the Salvation Army expect?  If you, in so many words, accuse your most dedicated supporters of racism, why are you surprised when they withdraw their support?

The Salvation Army should have read their Bibles more carefully before deciding to step away from Scripture and towards secularism.  The prophet Hosea’s warning to Israel might have given them pause.  “They have sowed the wind, and now they will reap the whirlwind”.

My donations to the Salvation Army will, in future, consist of one of these preprinted slips, cut out and kept in my wallet for use when I encounter one of their famous “Red Kettles” at local supermarkets and other sites.  (Click the image for a larger view.) 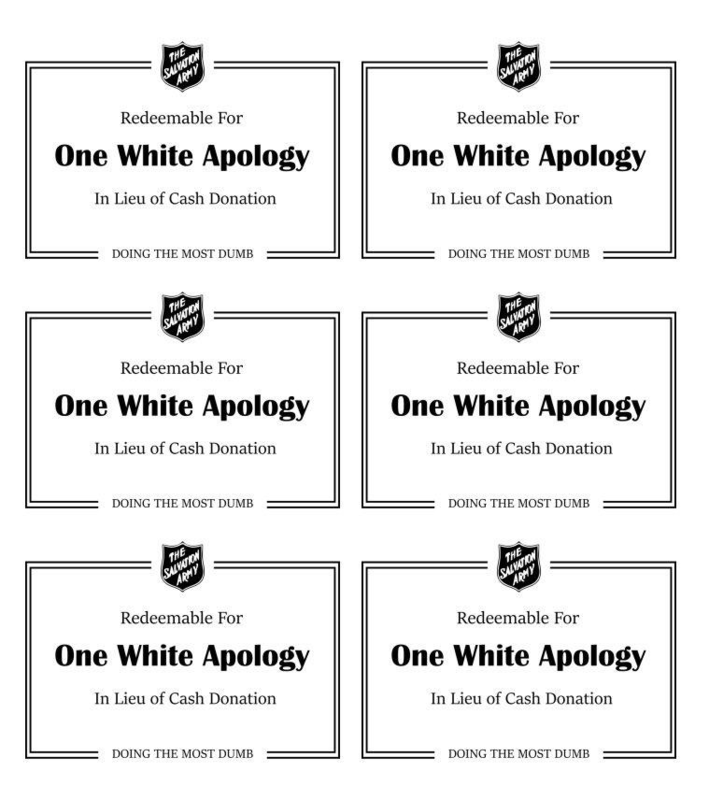 That, at least, is a contribution they’ll understand.  (Aesop’s contributions will be somewhat more graphic, as will his ongoing rejection of their position.)